Brewers from around the corner!

It is a known fact that Quebec has tons of delicious craft beers for everyone. I decided to focus on the beers that tend to be more popular in the Capital Region. Since fall is around the corner, let’s try two comforting beers...

Nuit d'automne
Quadruple (10 %) - Frampton Brasse (Beauce)
This iconic beer from Frampton Brasse is perfect for when those colder nights around the campfire! This beer has won many awards in several competitions and is realized by an amalgam of unusual and specific techniques. It is a dark ale with an intense caramel finish. Its bitter aftertaste balances all the flavors and makes it go down easy despite its high alcohol level.

Brumaire
Scotch ale refined in bourbon casks (8 %) - Brasserie Générale (Québec)
This second suggestion is still a caramelized beer, although this one is brewed in Charlesbourg. Scotch ales usually tend to be oriented toward flavors like caramel and toffee. The Brumaire is actually sits in empty barrels of american bourbon for 4 to 6 months. The wooden notes along with the slight tannic taste brings a new dimension to this beer making it complex yet so good. 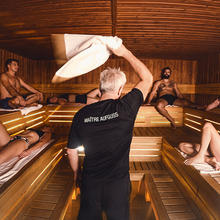