7° C
Suggest an event Newsletter Blog Magazine
What to do? What's up?

First of all, let’s start by making something clear: MC12 is pronounce “MEC TWELVE”, not “M-C twelve”. Now that we’ve clarified that, let’s talk about the band. You probably saw them playing covers in bars, but you have most likely heard their original songs on the radio!

MC12 has now released four singles from which two truly stood out. Times got up to number 8 of the Top 100 while Never Felt That Way became number 11 of BDS’ ranking!

American artists have nothing on the pop music band from Quebec city! MC12 is actually working on a microalbum that should be ready for this fall with their four singles as well as three brand new pieces.

You should also go and download their songs on all digital platforms!

Beers for fall
Brewers from around the corner! 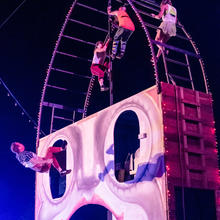